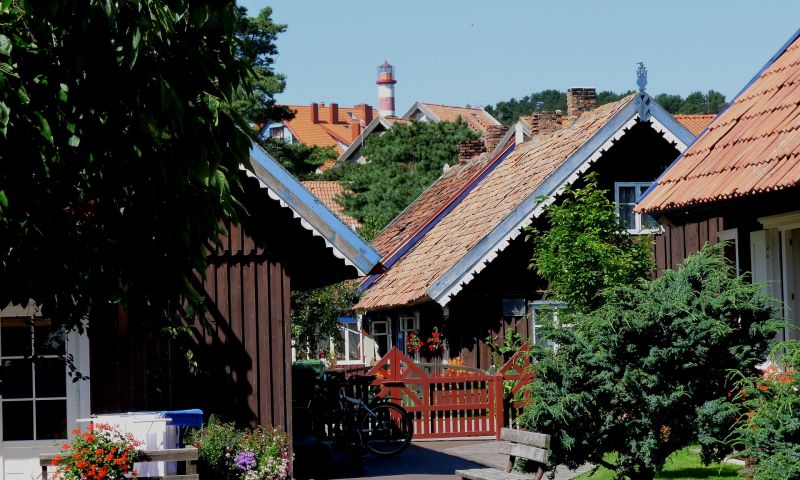 Listen the sounds of the sea. Swipe over the fine sand. Prank yourself with jewelries of amber and take a small part of Lithuania to your home.

Take the rental car at Vilnius airport. Night in a 4 star hotel of Vilnius.

After breakfast will be city tour at the capital city Vilnius. You will see the Town Hall Square, the Peter and Paul Church, the famous  Castle (Pilies) Street, Cathedral Square, the Gate of Dawn, the university district, Gediminas Castle, the Royal Palace of the Grand Duchy of Lithuania and etc. According to the wishes is an opportunity to visit the Trakai Castle (Seeburg) in the afternoon. The Castle of Trakai is located about 26 km from Vilnius. This unique complex is located in a beautiful place on the island, which is surrounded by lakes. You should also try the national dish of the Karaites (The Karaites are the smallest living in Lithuania people Turkic origin nation) Kibin. Night in a 4 star hotel of Vilnius.

After breakfast trip to Kaunas - the second largest city in Lithuania. The city is famous for its old town with the town hall, the cathedral and its charming and famous pedestrian zone “Laisvės alėja" (Avenue of Freedom). The panorama of the city, you can comfortably see from the funicular. The funicular of Žaliakalnis is one of the oldest working cable cars in Europe. On the way visit the folklore museum Rumšiskės. The museum covers an area of 175 ha. There are about 100 buildings - monuments of folk architecture. The exhibition is divided into ethnographic regions - in them are typical for a particular region houses with interiors, ancient objects and clothing. On the way to Kaunas also will visit the Monastery of Pažaislis. The ensemble was designed by Italian architect Giovanni Battista Frediani, decorated with stucco work by sculptor masters of Lombardy and the frescoes of the Florentine painter Michelangelo Palloni. Every year, here comes lots of pilgrims because of the well-known Picture for "Maria with Child ". Night in a 4 star hotel of Kaunas.

After breakfast drive along the river Nemunas. This path will amaze you with a variety of castles, hillforts unexpected from there opened panoramas. At the confluence of the Nemunas and Veliuonėlė rise at about a 30 m high hill next to each other two mounds of grave - hill of Gediminas and the hillfort. If you drive along the river another 11 Kilometer, you will see small Town Raudonė. Through the town flows the brook Raudonė, which gave the name its place. Here you will see the impressive castle wich representative Raudonė. The red towers of the castle are particularly impressive. From 33.5 m high castle tower you can enjoy the impressive panorama of the Nemunas region. Continue raod along the Nemunas River you will see another castle – Pamenunė castle. The city Jurbarkas is one of the oldest cities, founded around 800 years ago at the confluence of three rivers - Nemunas, Mituva and Imsre. Tourist Attractions in Jurbarkas: the Memorial Museum of V. Grybas, the monument of Vytautas Magnus, the manor park. Tour continue through Šilutė to Ventės horn. Vente horn is a headland in Nemunas Delta, located in Šilute district. It is known as a rest place for many birds during their migrations, particularly the autumn migration. One of the first bird ringing stations in Europe, still in operation, was opened here by Tadas Ivanauskas in 1929. In ornithological station of Ventes horn is a museum. In addition, visitors are able to admire the beautiful landscape which opens from the top of the unique old lighthouse located there. Overnight in a hotel of Ventė.

After breakfast a trip to Švėkšna. Švėkšna – the town, famous for its highest point in its area (75 m) two-towered, red-brick church (1905) and also by the XVIII century park with impressive alley of lime which was set by Counts of Pliateris, also it is famous for Genovaitė villa, palace, ponds and sculptures. Trip to Klaipėda. Klaipėda is the only port city, the industrial, commercial and cultural center in the western part of Lithuania. It is not only the oldest city, but also a total one of the oldest cities on the eastern Baltic. The heart of the city is the theater square. It is a popular meeting place for locals and guests. In the middle of the theater square is a fountain with a sculpture of "Annie of Tharaw". The monument to the little girl in 1912, built by the Alfred Kune from Berlin, commemorating born in Klaipeda German poet and writer Simon Dach. In the Klaipeda Old Town and New Town there are still many German architechture style:  pre-war buildings, art nuoveau and wooden frame, even if they are frequently standing side-by-side with newer ones. Among the more interesting is the post building and various red brick port warehouses. Strolling on the straight narrow old town streets may be as rewarding as seeking specific landmarks. In the end you can visit the underground castle museum of Klaipeda. Overnight in a 3 star hotel of Klaipeda.

After breakfast trip to the Curonian Spit. Curonian Spit is a 98 km long, thin, curved sand-dune spit that separates the Curonian Lagoon from the Baltic Sea coast. Since 2000, the Curonian Spit is a World Heritage Site by UNESCO. Neringa‘s Municipality was the first one in Lithuania to start participating in the Blue Flag program, and already in 2002 Nida‘s beach was awarded with the Blue Flag. In 2004, Juodkrantė‘s beach was awarded with the Blue Flag as well. First stop in Juodkrantė on Amber Bay. In the years 1860 to 1890 an average of 7500 kg per year was won in Juodkrantė. But later, the extraction of amber fell sharply. Worth a visit is the Hill of Witches and cormorant colony. On the way can visit the Dead dunes at Pervalka. Night in Nida.

Breakfast. All day will be spent in Nida. Attractions in Nida: the high dune with sundial, traditional fishermen's houses, Evangelical Church, the promenade along the harbor, the lighthouse, the Amber Gallery, historic cemetery cures, Thomas Mann House or visit the Mizgiriai Amber Gallery - Museum. There is a large collection of certificated Amber. Overnight in Nida.

After breakfast a trip to Palanga. A jewel of Palanga city is the Amber Museum with Park. In the museum are exhibited about 4500 amber commodity. Continue along the Žemaitija National Park. Here is a small city - Plateliai. Possible attractions: Žemaičių Kalvarija, Beržoras, Šarnelė, the park of energetic labyrinths, Siberijos / Barstytalių / Jogaudų Towers, Manor of Plateliai, Shrove Tuesday Museum. Round kame hills and moraine mountain ridges, surrounding the pit of Lake Plateliai, numerous deep or shallow lakes, swamps and winding streams are characteristic of the relief. The highest point – 191.8 m, the lowest one -110 m above sea level. The whole territory of the park is a part of the Žemaitijos highlands that includes: hilly stretches of Plateliai and Plokštinė, Barštyčiai ridge, Plateliai scoop (formed by the Plateliai group of lakes).  Cold war museum. Today, this secret object is open to the visitors. Former missile and the internal apparatus control facility are equipped with a historical exposition telling about the five decades of the Cold War- one of the most famous and most dangerous military conflicts in human history. Telšiai is a city called the capital of Žematija (Samogitia) located in north west Lithuania. The city is settled on 7 hills surrounding the legendary Mastis lake, thus it is sometimes called Rome of Lithuania. Telšiai is particularly proud of its downtown, because this is on the list of protected monuments of Lithuania. Among the most popular attractions in Telšiai: The cathedral of St. Anthony from Padua with two main altars on each floor and Samogitians' museum “Alka“. Arrival to Šiauliai. The name of Šiauliai can be derived from the history of Saulės Mūšis (sun fight), so the northern city in the country has got such a mild term. Visiting places: Sculpture "Dawn", Šiauliai Cathedral of the Apostles St. Peter and St. Paul, "Solar Disks" Fountain, Sundial Square, “Cockerel" Clock Square, Stained Glass Window, “The Battle of the Sun". Accommodation in a 3 star hotel located in Šiauliai.

After breakfast drive to the Hill of Crosses. The Hill of Crosses is a historical and architectural monument, a unique ensemble of folk art. The Hill of Crosses, where people not only from Lithuania have put crosses for couple centuries, witnesses faithfulness and trust of a Christian community to Christ and his Cross. This is an expression of a spontaneous religiousness of the people, and is a symbol not of grief and death but of Faith, Love and Sacrifice. Drive to Pakruojis. Here you will visit the manor of Pakruojis. The complex of farm buildings is registered in the Lithuanian Book of Records as the largest standing under protective manor. In addition to a large park located in the English style. Near the building there is a lot of farm buildings and arch bridge has become a symbol for Pakruojis - a dam on the river Kruoja with water mill. Continue through Joniskelis to Anykščiai. In Lithuania Anykščiai is the place of the poet. Attractions in Anykščiai: the tallest church in Lithuania - St. Matthew Church. Church tower observation deck – top sightseeing attraction in Anykščiai. A wonderful bird flight view of the town in the river Šventoji valley. You will visit the railway station and the Museum of narrow gauge railway, the Horse Museum. In southwest of Anykščiai is stone "Puntukas". The most visited stone in Lithuania is in the Anykščiai wood's landscape reservation. Puntukas is not only interesting for visitors as a spectacular monument of geology or the stone surrounded by mythological legends. In the midsummer of 1943 during the German occupation, sculptor Bronius Pundzius finished the bas-relief of pilots Steponas Darius and Stasys Girėnas, who flew over Atlantic Ocean and words of their testament. “The light of happiness" – The memorial of a writer Jonas Biliūnas on the Liūdiškiai hill. Old Anykščiai inhabitants called it a sand hill or Sahara of Anykščiai because it was naked, wind-blown and without trees.) Now the trip goes towards Molėtai, Astronomical Observatory Museum. In this unique museum visitors are introduced to the work of astronomers, their instrumentation, development of astronomy, techniques of observation, telescopes, variety of celestial objects, development of the universe bodies and lectures are demonstrated illustrated with images in a hall. Visitors are also offered night observation of distant celestial objects through a telescope. Here is one of the largest publicly accessible telescopes in Europe. Accommodation in a 3 star hotel of Molėtai.

After breakfast, take a walk through the city Molėtai. Continue with the Geographical Centre of Europe. Scientists of the French National Institute of Geography declared the geographical center of Europe to be in Lithuania, 26 km north of Vilnius. The geographical center of Europe is decorated with a composition created by the famous Lithuanian sculptor Gediminas Jokūbonis and dedicated to the accession of Lithuania to the EU. It is a white granite column decorated with a crown of stars. Next objects - Europe Park. Europos Parkas was founded by Lithuanian sculptor Gintaras Karosas. The exhibition spans an area of 55 hectares. The goal of the museum is to give an artistic significance to the geographic centre of the European continent and to present the best of Lithuanian and international modern art achievements. While enjoying the treasured landscape of the park, you will at the same time discover the admirable world of art. Accommodation in a 4 star hotel of Vilnius.

11 Day: The journey to home

Free choice of dates. The trip is booking throughout the year. Itinerary changes are possible. 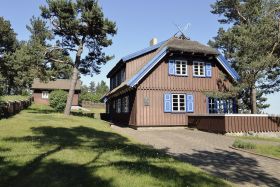 Baltic
From 1465.00 € for an adult
17-day Latvia and Lithuania round trip by rental car and bikes 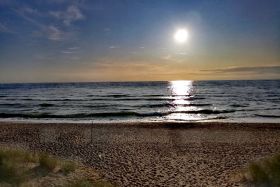 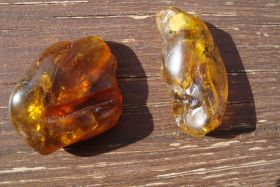 Baltic
From 895.00 € for an adult
By Rental car along the Baltic Amber Road